This summer I had a wonderful God given opportunity to visit the large port and bustling city in the South of France, called Marseille, for 1 month. It is a beautiful place situated on the Mediterranean coast with a population around 1 million. (It is estimated that 1 in 4 are from North Africa.) After a very eventful journey, I arrived in Marseille, and straightaway was involved in a musical concert at the beach where Luis Palau preached the word of God. I was responsible for the sound system for the crowd of thousands of people. It was a great encouragement for me to see 60 people giving their lives to Christ that very first day and many more on the second and third days.

Soon after the first day as a consequence of the mission a two-storied church building was burnt down.The reason for that was expected to be a reaction to the concert, France being traditionally a Catholic country.The concert was an effort at evangelism. 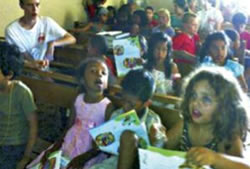 The following week I was involved in a Vacation Bible School held at Eglise Réformée Evangélique Indépendante Church in Marseille. More than 40 children of age group between 4-14 years took part in it.Their enthusiasm to know the Lord was a great encouragement for me.They were from various ethnic backgrounds and many different religions.

I was also working at the AWM media centre from 9am to 5pm almost every day. I was responsible for various media work such as PALM (Preparing Arab Leaders for Mission) courses, which aimed to prepare bible study material for pastors and leaders in the Arab world. These materials were further translated into many different languages. I also assisted Joan write a book on the women characters in the Bible. For this, 6 women characters were suggested to me from the New Testament and I was supposed to write 1500 words on each of them, with a clear Gospel emphasis. I also worked to get pictures ready for MMS to be released in August during Ramadan.

One Friday I went with Maged and Joan to a friend’s house for tea. Later that evening I discovered that another couple were invited for tea too.The lady introduced herself as a French Christian but her English husband (from the Isle of Wight) told us that he was an atheist. Interestingly at the table after listening to everybody’s long conversation I interrupted him by asking him certain David Morrish
questions and was able to share my faith in Christ with him. I didn’t know this person and just shared without even expecting any result and went on my way. We were surprised when we found him in our church on the Sunday morning; this was the very first time, his wife told us very excitedly, that he had been to church in his whole life! I also had various opportunities to meet and encourage Muslim friends personally.

I am amazed to see what the Lord can do through His people. God enabled me to engage with 40 children (even though I was not a French speaker) at the Bible school and He also gave me the wisdom for the Bible engagement with non-Christian people and in giving challenging answers to the atheist’s questions about various aspects of life. I give all the glory to God, because He alone is worthy of praise. I am nothing other than a vessel, which is being prepared for the Master’s use.