In June 1907 Rev. Francis W.Cole of Trinity Calvinistic Methodist Church in Tonypandy was invited to preach at Heath and as a result he received a call to be the next minister there.

Rev. Cole had ministered at Tonypandy for seven years and the church there had known much blessing during the Revival of 1904—05. His pastorate at Heath was also greatly blessed and the church made steady progress as its outreach was extended into the newly-built streets.

After the death of Rev. John Pugh, links with the “Forward Movement” were still maintained through visits by evangelists such as Frank and Seth Joshua.

By 1915 Heath, with a membership of over 400, had become the largest of the “Forward Movement” halls in Wales and it continued to grow despite the strains imposed by wartime conditions.

Over 200 members served in the armed forces and the church provided spiritually and materially for troops from Maindy Barracks nearby.

Shortly before the war ended Rev. Cole, who was highly regarded for his gifts as a minister, accepted a call to the Presbyterian Church at Cathedral Road, Cardiff. 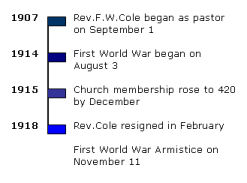