10.30pm,Wednesday 17th Feb: sat in Lisbon airport, Portugal, nearly a third into a 22hr flight to Manaus, Brazil. A good time to sit back and think about things; a bad time to think what on earth
I am doing!

From a pragmatic point of view what I was doing did not make sense, it did not benefit me and was
more likely to cause pain, illness and be a lot of hard work. So why go? God has given me the ability to do practical things,God has opened up this opportunity and if there is anything I can do directly or
indirectly to help one person find the way to their salvation then the trip has been worthwhile.With this
now in my mind, doubts went and enthusiasm returned. 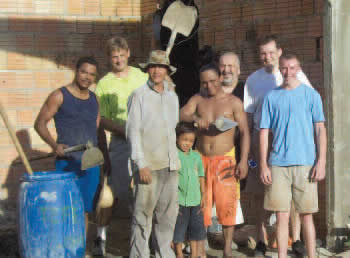 Our little team consisted of Pete a plumber from Southampton, Simon a general handy man from Gloucester, Nathan a carpenter also from Gloucester and me. We arrived in Manaus at 11.30am (local time) on Thursday. On the way to our accommodation we had a look at where we were going to be working. The whole area looked like a building site – some houses missing walls, others missing windows but every house lived in.The church was a modest building that could hold 50 to 60 people, consisting of rendered brick walls and a tin roof. Behind that was the manse, the walls were built and most of the roof was on and that was about it.

Work started at 7.30am on Friday, already I realised I would have to be versatile and have a go at whatever was needed.Nathan and I started work on the rooftop, building a wall that was to take a sloping roof at the front of the house. The temperature was 38- 39°C but it was the humidity that made it seem really hot. Sitting in this kind of heat is manageable but building a house takes some getting used to.

We lasted until around 11am,when the heat started to get to us so we went inside and started plastering. Lunch time was from 12 until 1.30pm (with the option of a nap if needed).After this we worked until 5 or 6pm depending on how tired we were.This was the general pattern of things to come,working 6 days a week and taking one or two afternoons off to do a little sightseeing and shopping.

I’d kept it clear in my mind from the start that this was a time to give and not to take and although people had said it would be a good experience for me, enjoying the trip was not a priority. However what I did want to do was to meet some locals. I was very happy that Andrew Love (the missionary we were working with) had planned lots of opportunities for this into our stay. The Brazilians inAndrew’s church did not disappoint. We met some great people, some of them included: a lady who told us about how she’d been involved in witchcraft when she was younger; a man who came to Manaus on the run from people who were trying to kill him; the man who everyone calls the taxi driver, no one gets out of his taxi without hearing the gospel; a 13 year old girl who was the star player on the football team but who’s father had been shot while burgling a house a few months earlier; the church evangelist who often walks around the streets spreading the gospel, forgets the time after spending 12-14 hours walking the streets talking to people,misses the last bus and then needs a lift home; and then Andrew the missionary and pastor of the church, a gentle, easy going man but sure of his goal – to spread the Gospel in Manaus and sure of the reformed theology that he tells them. 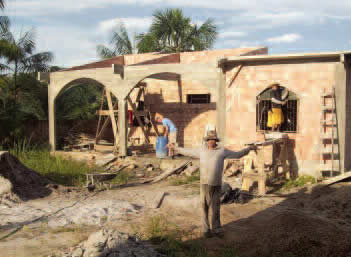 For me it was refreshing to see these people in a very different land that have not had life easy, all now sat in a church, listening carefully to every word preached. All genuine Christians, just like me, in their lives now; although converted, they all know the temptation to sin, just like me. They all need God to give them strength to go on and provide for them, once again, just like me. Although I came from a part of the world that was more affluent than theirs it didn’t make me better than them, or them better than me. I felt like a brother in a family. It made me long for heaven when we would be
free from earthly struggles.

We built walls, plastered walls, tiled walls, tiled floors, fitted a bathroom, fitted windows, fitted doors, dug holes, run wires, put up a sign and sweated.Why? Just one small part of God’s plan for His people. Andrew Love and I are very grateful to all who gave so generously to raise money for the materials for this project.

how to improve kidney function