Dear friends!
It has been a long time and I think that we have not been ‘talkative’ to say the least! I think that the last time we sent some news out, the premises where we met as a church were closed down by the authorities. And while we were still in ‘exile’, the situation with some the elders further deteriorated and I had to resign.

Since then I have been battling to have the Barnabas Centre reopened. The Centre belongs to a Christian organization called Barnabas Cameroon, run with the financial and logistic support of the Swiss-based organization, Barnabas Kamerun that raised financial and logistic support for their work in Cameroon. The Centre has finally been reopened, and from a board meeting that held last March, it was recommended that we should think of some activities that could be run at the Centre while regularizing the paper work.

For the last two months teenaged boys of the neighbourhood have been allowed to play five-a-side football every Friday afternoon.

We also have reopened the Centre to individuals and Christian groups for retreat under strict condition that there should be no noise and so far one church group has used the premises for spiritual retreat and another to conduct a wedding. There was no problem with the wedding, but I had to alert the other group at 1:00 am for loud noise.

A meeting of the executive members is scheduled for next week to follow up the decisions from the last general meeting and to prepare for the Elective General Meeting this August.

Apart from this, our time has been spent leading Bible studies in the difficult neighbourhood of Saint Michel on the outskirts of Douala every Thursday night, and preaching every fortnight in a small church in Souza 30 miles west of Douala.

We have recently started another home Bible study with the family of a young man who was converted while studying for his doctorate in France. Prior to this he had asked me to share the Gospel with his wife back in Cameroon, and I agreed. And for several months we met for Bible study on Thursday afternoons at the Barnabas Centre. Now they are reunited and had recently officially married and are enjoying the Bible studies and happily opening their flat to neighbours and friends to taste and see the goodness of the Lord.

I also visit Buea University each week to teach on Mondays and Tuesdays spending the night in a rented room.  I have recently partly accomplished my wish to have a bigger room nearer the University where Christian students would be able to meet for fellowship. But things are still slow to pick up.

The last duty is a visit an orphanage each month for fellowship and prayer.

Some of our struggles over the last year have been with our Toyota Land Cruiser, which is 19 years old and needs costly attention. Although quite a lot of money has been spent on this over the last six months, it is still down, and we are praying that the Lord will lead us to a truly qualified mechanic who can solve this problem. In the mean time we were able to have the Carina repaired and so far we are using it with some degree of satisfaction.

And the latest great gift received was from the Missionary Committee of the Heath Church in Cardiff that arranged for me to attend the Colloque Biblique Francophone in Lyon, France, in the week after Easter, to help compensate for several refusals of a visa to visit UK. All went well, despite the re-routing of these flights to avoid Brussels. The conference theme was the Greatness and Glory of the Christian Ministry. By all accounts, it was their best conference ever, and I was thrilled to be there and met former friends from the faculty of Theology, Dr Paul and Charlotte Tench, Marcel and Brigitte Meli who came a long way away for fellowship.

At home we are all doing fine. Results from exams have started coming in and Marc Donald was successful with is BEPC (Ordinary levels). We are awaiting David’s results. He presented Baccalaureat (Advanced levels). Ann Mercy is doing very well and will be going to class 2 next September.

This is an update from us after a very long silence and we will endeavour to do this on a more regular basis. Thank you for your faithful support and prayer.

Yours in the Master’s service,
Anatole

Preaching in France after attending the Colloque Biblique Francophone 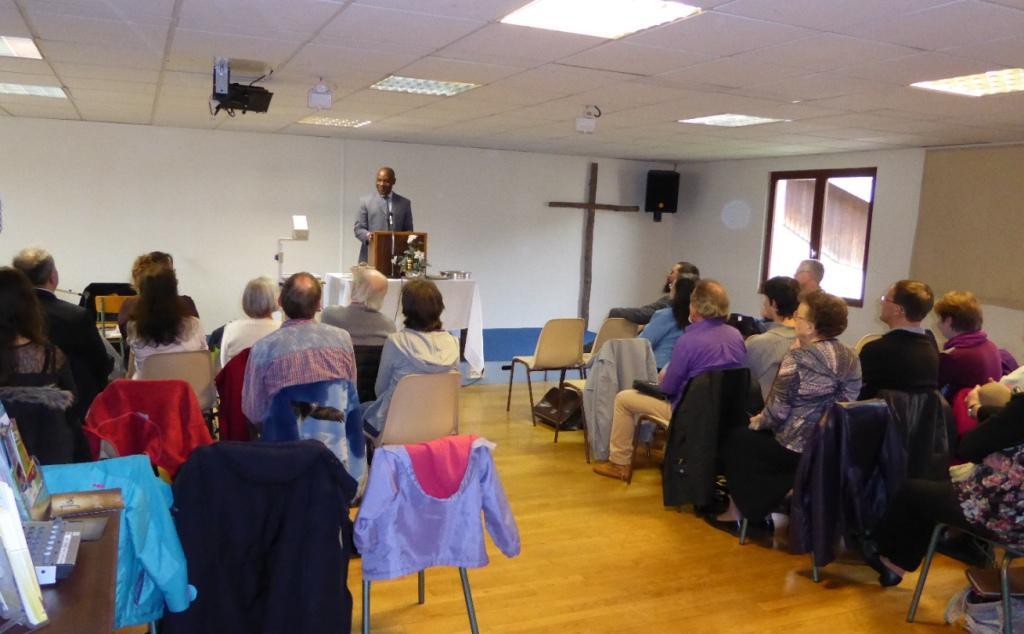