The city of Cardiff has always had an international flavour in its population. The numbers may not have been very significant in times past but in recent times the picture on the streets is rapidly changing. We have seen a very visible change from the time we came here in 1989. When we speak of the evident growth of ethnic minorities, we are particularly speaking of people from South Asian background, even though the same can be said about other groups. The flavour of Asian food and dress is here to stay and our supermarkets also have begun to cater for them. 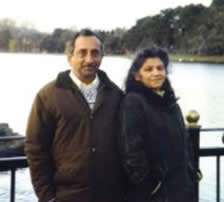 The growth of the South Asian population has occurred in various ways. During the 1970s, it was a migration of Asians from East Africa. Then marriage alliance from the Indian sub-c0ntinent brought a good number of people. The chain immigration, when one member of a family comes over and slowly invites and sponsors others, is another factor. Recently, the professional migration of doctors, nurses and information technology people is rapidly increasing. They bring a wonderful blend of culture and taste to our society along with their religious ideologies. There is a group of British Asians, who are born and brought up here, who go through an identity crisis as they live in two diverse cultures. Some have been able to adjust to the demands of the two cultures, but many struggle with this.

Many of them are lonely and often go through a culture shock and they have a real need of adaptation to the situation in Britain. Those who have come straight from their homes in South Asia do find life hard for the first few months and need a lot of help and guidance to have a smooth period of transition. We, as members of the Heath Evangelical Church, and also as a family from an Asian background, desire to cater for the needs of the community. It has been our privilege to have an open home where people can come and find love and acceptance. There have been wonderful opportunities to share our time and lives with people and it has been very rewarding. In our situation, the fact that we are Christians very often gives a natural opportunity, sooner or later, to share what the Lord Jesus Christ means to us, and what He has done for us for our eternal destiny. One of the highlights is our annual Christmas Celebration where we get a large number of people of many nationalities sharing their food and the diverse flavour of their culture. The ministry is motivated by a genuine concern for people to help them in their situation based on the love of the Lord Jesus Christ for all human beings.