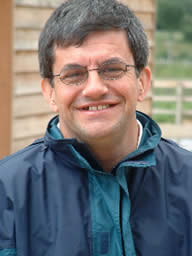 David Morrish works with international students and scholars in Southampton as an affiliate with Friends International and in partnership with Christ Church, Southampton.

After more than 40 years of working with the Navigators in France, David stood down from his role as a full-time representative with the Navigators on reaching retirement age in May 2018.
The Bible has little or nothing to say about the subject of retirement, but what is clear is that there is to be no “retirement” from the challenge of fulfilling the Great Commission: Go therefore and make disciples of all nations. Matthew 28:19,20, is the challenge of a life-time!
David is now investing his retirement years in seeking to befriend, support and disciple international students and scholars from all nations of the world at the University of Southampton.

Over one million international students and scholars come from all over the world to study in the UK every year. An international student will encounter many unfamiliar situations and will often suffer loneliness as they struggle to adjust to a different language, culture and educational system. Many seem to be very open to the Gospel in ways that might not have been possible back in their home countries and cultures.

In 2 Timothy 2:2 the apostle Paul, a seasoned disciple-maker, urges his young protégé Timothy (himself the offspring of an international marriage) in the following terms:
You then my son, be strong in the grace that is in Christ Jesus. And the things you have heard me say in the presence of many witnesses, entrust to reliable people who will also be qualified to teach others.

Befriending and discipling internationals can be likened to a relay race. The important thing in a relay race is getting the baton to the finishing line. The baton is the good news of the Gospel and each runner’s job is to do their part as God’s messenger, taking the Gospel wherever He sends them, by passing on the baton. Somewhat surprisingly for English speakers, the word used for baton in French is not bâton but témoin. It is the word the French use for a witness, someone who is called to account and declare before others what he has seen or heard and knows to be true. It is this same word that Paul uses in his admonition to Timothy to entrust to faithful men and women who will be able to teach others also. What makes the difference between an effective handover and a dropped handover? It is when the message of the Gospel becomes embodied in the life of the runner. The message and the messenger become one. There is a brief moment in a relay race when the baton is exchanged, and the two athletes run together. It is the critical moment in the race and will determine its outcome. My time with international students here in Southampton is but a brief sprint of running together. Many are only here for a year at a time. However, if I can learn to faithfully run alongside the people that God brings into my life, by passing on His Word, sharing my life and ensuring that they pass it on again in their home countries, I will by God’s grace, influence future generations for eternity throughout the nations of the world. One life helping another, in order to help another.

Would you join me in praying that the vision that God has laid on my heart would become a reality in the lives of the internationals that God brings into my life both now and in the years ahead?

With grateful thanks to you all at the Heath for your precious prayers and partnership over the years.