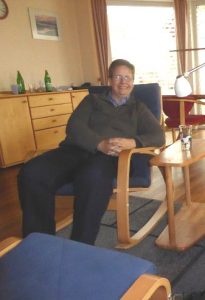 Dörthe has been working in Germany for the past few years and now lives in a small town called Dülmen, not far from Münster. At the time of the huge influx of refugees four years ago, the churches in Dülmen called for a response from the citizens of the town when it was announced that Dülmen with its population of about 30,000 would be allocated nearly 800 refugees. The response was overwhelmingly positive, with 80 people attending the second meeting, and what emerged was the Dülmen Refugee Initiative. It was so well organized that the town of Dülmen won a prize for their integration work.

The Initiative has 5 tasks: 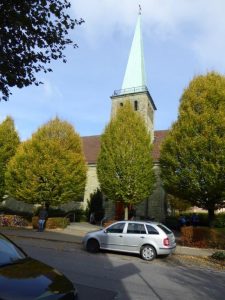 The Lutheran Church in Dülmen 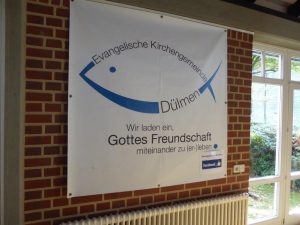 The Lutheran Church in Dülmen

There is also a steering committee in which Dörthe co-ordinates oversight of the whole Initiative with vision building and concept development, ie new ideas and initiatives for eg drivers’ licences, written exams – anything new that crops up. She is thus heavily involved in the Initiative – 2, 4, 5 above and the steering committee.

Dörthe holds a contract with a salary for 19.5 hours work until April 2021, when incidentally her leave of absence from the German Wycliffe expires. The money comes from the church, the Initiative and the Land prize money; it is administered through the church, so she is technically now a half-time church worker. For the remaining hours, she works freelance for NGOs and for the county; they call upon her for her services as they see a need.

Paul Tench adds: Dörthe loves the work; she is in her element and gets great delight in serving. She is keeping well, very active and busy and has a lot to offer, not only on account of her experience and expertise, but also with her organizational skills and serving heart. She is committed to the Lutheran church in Dülmen and appreciates the ministry from the three pastors there. She is involved in counselling and mobilizing integration in the church, and in Bible studies with a group of refugees and a women’s group in Lette, where her sister and family live. They also attend the same church in Dülmen and provide a good, solid, Christian family environment. They long to see conversions among the people they serve.