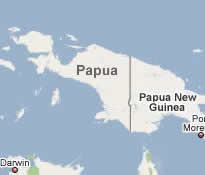 Klaus-Peter and Doris Kügler were involved with the Fayu since they arrived in Indonesia in 1978, with the aim of establishing the Gospel among them and preparing the way for the translation of at least part of the New Testament. The Fayu people are a small ethnic group in the province of Papua, the western part of the island that it shares with the separate country of Papua New Guinea. 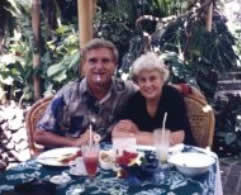 They initially worked with the Wycliffe Bible Translators, but were later sponsored by an Indonesian Christian organization known as the YPPM, led by Pastor Wopari. In 2008, another Indonesian Christian mission, the YBI, also began to share responsibility for the work among the Fayu. The leader of that mission, Pastor Hendrik, was invited to accompany Klaus-Peter and his partner then in the ministry, Daniel Gallant, on a visit to meet the Fayu. Here is a report of that visit, which recalls the beginnings of the whole work in 1978. The work continues today, back with the Wycliffe Bible Translators partnered with the same two Indonesian missions, with a view to translating parts of the New Testament into the Fayu language.”
For further news and reports on the work, click here.

I asked Pastor Hendrik to accompany me and Daniel to meet with the Fayu people. So we organized special gatherings in Kwaisa, a village of the Tigre Fayus, where Daniel has stayed before, and in Foida with the Iyarike Fayus. Pastor Hendrik introduced himself and his organization. He spoke in Indonesian and was translated into Fayu by Baiba. These two meetings went very well. We all sat in one of the class rooms of our school. 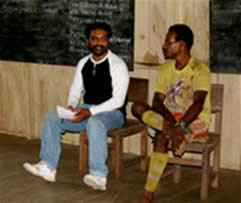 During the meeting at Foida, with the Iyarikes, something crossed my mind. As I looked at the audience, I realized that most of them were not even born – or they were too small to remember – when I first entered their territory, exactly 30 years ago. Just about a dozen older ones remembered, and most of them were present at that meeting, like Chief Nakire, Kologwoi, Teau, Fusai, Fairo, Kloru and a few others. Suddenly the thought came – while we all were together – to tell them how I found them 30 years ago. So I started to tell them about the survey trying to find them as an ‘unknown tribe’ in an unchartered territory. Nakire was my guide.

When I started to share, their eyes were hanging on my lips as they had never heard the report before first-hand. Tremendous excitement filled the room. I talked about the awkward, uneasy feeling while going upriver when Nakire suddenly discovered an ambush. He noticed several eyes looking through the jungle bushes. We were being closely watched. But thank God, nothing happened. Then I shared about the man upriver, totally naked. When he saw us he was shaking like a leaf for fear having never seen ‘whites’ before. My audience looked at each other with amusement and suddenly broke out in a huge laughter. It sounded so funny to them. 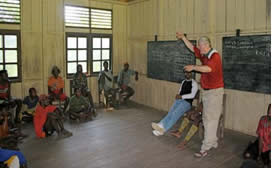 Then I shared about meeting the dangerous Chief Ziau upriver and about noticing a corpse in his hut. It was an awful, terrible sight. And suddenly Nakire and Ziau were facing and accusing each other pointing with bow and arrows. These were very tense moments but thank God we were protected. In fact the following night while praying God opened the eyes of one of us and he saw 12 angels in a circle around us in beautiful white raiments. While sharing all this the audience kept looking over to Nakire. He was nodding his head saying, “Yes, that’s true!” I told them the whole story – and again and again I was interrupted by their cheers and laughter.

Then I shared how we met warleader Chief Teau and his 10 warriors who with great suspicion surrounded us for 3 days, inspecting all our belongings. Teau, who was present, was beaming all over and gave his confirming comments. After the 3 days I finally called him and through 3 ‘bridge’ languages I started a conversation. I told him that I was considering coming with my family to them, building a house, learning their language in order to give them an important message. And after a moment of quietness he replied: “White man, since you have come, my heart has become glad, and I am tired of killing people. Please come and live among us.”

As I shared this I sensed that these were special moments of rememberance for them and for me. Finally I concluded the survey report: “That’s how the Lord opened the door for us to come and eventually live among you.”

However I continued talking to them. I asked the question: “Why did we come? Why did Daniel come?” Immediately the answer was given by Diro, one of the brightest among the young men, “To bring us the Gospel of Jesus Christ.”

“Yes, thats true. Not for opening a tradeshop, for repairing your outboard motors and so on, but for the Gospel. Some people at home were not happy with us leaving our country to live in the jungle among you. But God loved you so much that He opened the door for you to be discovered, and He appointed us to present Jesus Christ and His love to you through our lives,” I replied. They cheered with a loud voice and were clapping their hands.

I continued my memory report: “I remember the testimony of Chief Kologwoi – who is with us today – how he one day was threatened to be killed by warriors of the neighbouring tribe. (Everyone kept looking over at Kologwoi, who was smiling and confirming the story by nodding his head.) But he put his trust in Jesus, putting down his weapons in front of the enemy, saying ‘I am not afraid, you can kill me, but up there is a good Jesus, the Jesus of Klausu and Doriso.’ And Jesus delivered him. The attackers were stunned and paralyzed. They turned and went back into the jungle.” Again everyone cheered for joy!

I continued talking to them: “More and more of you received Jesus and your lives were changed. The wars stopped. Visions and dreams were given to you. Some of you have seen angels. And you have witnessed the power of God by praying for the sick, by asking the Lord to supply food for you and so on; in fact, you have experienced the coming of the Holy Spirit in power, signs and wonders. Do you remember Orori and Hanna (US) ministering to you?” Again they cheered with excitement.

Then I pointed to Teau who was sitting among them. “You have seen the fire of the Holy Spirit over the jungle where nothing was burned. No hut, no tree, no bushes – and you witnessed someone walking over the tops of the trees, and the most captivating thing was seeing his head: it was glowing and shining in the brightness of the sun, and you knew that this was the Lord Jesus Christ.” Teau was smiling all over and was nodding his head in confirmation.

Then I turned to Nakire’s wife Fusai and asked: “You have seen the fire too.” “Yes, I have. I was on the other side of the river.” she replied.

“During those days I saw so much joy among you. When the Holy Spirit came some couldn’t even stand in His Presence. Your knees became weak and you were falling down. Then I pointed to Phairo who was sitting close to me on the floor and said to him: ‘You too were overwhelmed by His Presence and you were on the floor for over 8 hours. I kept you in my hut the whole night, and I noticed that the only thing which came out of your mouth was ‘Jesus, Jesus, Jesus’ continually, and in the morning you were still whispering that wonderful Name.’” Phairo was beaming with joy, and he confirmed the account.

As I continued with my report I became more and more excited about the manifestation of the Kingdom of God among them: the change of rule among them. Once the enemy was ruling and controlling but – as we have proclaimed for many years – he was totally conquered by Jesus Christ the King. Glory!

Not only I but all in the room were full of joy and excitement. There was a sense of the fear of God among us. We were in awe! Slowly I came to an end with my testimony report. However, I felt that there was one more thing I had to say: “You from the Iyarike tribe have no excuse when you stand before the King. Everyone of you have heard the message of Jesus. It is your responsibility now to make the right choices. Most of you have received the Lord but with some of you He is still knocking at the door of your heart. Will you let Him come in? You yourselves are responsible for your decisions. I will keep you in my heart forever. I am your father, you are my children, and from time to time as God permits I will come to visit you. But the most important thing is that you know your heavenly Father through Jesus Christ. He is the best Father of the whole world and He loves you. Hold tight to the Lord Jesus Christ all the days of your life…”

Then after the meeting Pastor Hendrik asked people to the front for prayer, for a new or a re-filling of the Holy Spirit. Several came forward, and Hendrik and I ministered to them. I believe that this was a special, historical meeting with the Iyarike Fayus. You all have part in what the Lord has done among them. Rejoice with us. However, let’s continue to proclaim that “Light and Life have come to the Fayu nation, and the powers of darkness have been destroyed in Jesus’ Name.”

LATEST NEWS from the Fayu Project