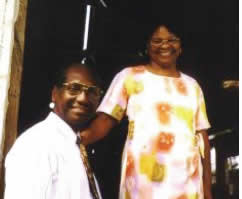 Martinez and Immacula serve in Haiti with the Bethesda Fellowship of churches.

OEBB’s vision is a Christian ministry that exists to bring life transformation to every man, woman, and child in Haiti in the key area served by the mission.

Our mission is to advance the Gospel in Haiti through the church, education, medical care, and development.

The mission provides a Christ-centered education equipping schools with a Gospel-focused curriculum for six primary schools and two high schools.

Working through eight churches in Haiti, our aim is to build churches that are faithful to the Gospel message and share the hope of Jesus Christ through;

It is our goal that more biblical resources would be available to pastors and local leaders. Our aim is to help lay leaders gain a better understanding of God.

We strongly believe that the local church is the primary tool for glorifying our triune God and spreading the Gospel efficiently. We seek to strengthen the local Body of Christ in Haiti. We seek to equip and encourage Christian leaders to serve their local communities.

Due to limited access to education in Haiti, this creates a national negative ripple effect on the country’s health, economic production, and the inability to compete in the global economy. At the family level, education often brings both stability and opportunity. The ability to read also means the opportunity to study and understand God’s Word.

The work of the clinic in Marbial was established in order to minister to more remote communities.

What else can we do? In the meantime, read Psalm 46 and Nahum 1: 2-7, and pray! And watch television news and see the city and the country where they serve, and the plight of the people they would like to reach, and the roads they have to travel on – and pray!

Haiti: Answers to prayer
The spiritual response to the tragedy of the 2010 earthquake was an almost universal outpouring of prayer, repentance and calling upon God for mercy and deliverance. Out of the disaster, God appears to be doing something radical and new among the people of Haiti. Reports abound that the three days of prayer and fasting called for by the President – replacing the February 2010 Mardi Gras – were attended by over one million people.

Challenges for prayer
The earthquake of 2010 was a disaster on many levels. But it also offers hope out of tragedy. It is believed that 230,000 lost their lives, 300,000 were injured and over one million were rendered homeless. Hundreds of thousands of homes and buildings were also destroyed, including some major government buildings. Aid arrived from around the world, but co-ordination was difficult in the aftermath of the earthquake, and assistance will be needed for along time to come. For a host of reasons, Haiti struggled as a nation from its very inception. This shattering disaster could be an opportunity to reshape not just the physical infrastructure of the nation, but the cultural, economic, political and societal infrastructures as well. Some points to cover in prayer include:

a) The rebuilding efforts will take years. Haiti’s infrastructure was never good, and Port-au-Prince’s was especially weak due to rapid urbanization from poorer rural areas. Countless homes will need to be rebuilt or restored; the sheer scale of money and manpower needed is staggering for the Western Hemisphere’s poorest nation. Pray for the best long-term development for the city and nation, rather than quick fixes. Pray for generous assistance from wealthier neighbours and nations and agencies from further abroad.

b) The human suffering was immense in the immediate aftermath and will continue for years. The shared emotional trauma of the events, the massive loss of life and the long-term injuries will all leave major scars on the Haitian population. Healing from such hurts needs time, care and the love of God.

c) Haiti was a financial and social mess even before the earthquake. Repairing all the damage, however, will not create a healthy economy. Haiti must build beyond its previous state and develop long-term plans and policies that are shaped with wisdom and justice.

LATEST NEWS from Martinez and Immacula