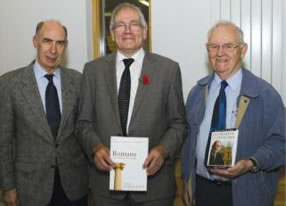 Some 60 people attended the book launch in one2two on 5 November for Dr Eryl Davies’ biography of Dr Lloyd-Jones and Dr Tom Holland’s commentary on Romans. Two sessions were required to accommodate everyone in the first floor lounge.

Eryl Davies wants to introduce Dr Lloyd-Jones to a new generation of Christians for whom the authorized two-volume biography might be a little daunting. Gwynn Williams, Pastor of the Welsh Evangelical Church, Cardiff shared some fascinating anecdotes from his time as Pastor of Sandfields Evangelical Church, the first church pastored by “the Doctor”. He urged us to appreciate faithful servants of the past but not to idolize them.

Dr Davies then introduced Tom Holland. Dr Davies, in the late 1980s, had published in BEC’s Foundations Dr Holland’s highly original article on “The Firstborn of all Creation” in Colossians 1. Dr Holland recounted his struggles with the commentaries on Romans he had available when preaching through Romans to his church in the 1980s. He came to see that they assumed that Paul was a Greek thinker when in fact his mind was thoroughly Jewish and immersed in the Old Testament Scriptures. Dr Davies eventually invited him to be the New Testament lecturer at WEST, and his new book on Romans is, in fact, dedicated to Dr Davies as a latter day Barnabas.

Each presentation was followed by a book signing downstairs in the link area and then volumes were bought in the adjoining book shop: 65 of Dr Davies’ slim volume and 23 of Dr Holland’s 600-page tome. “A week’s sales in a day” said the delighted Manager, Robin Hate.