We flew from Heathrow on Wed 21st at 1300 to Delhi, a direct flight which took just over 9 hours. We stayed with Suren’s nephew for few hours in Delhi and we visited a few land marks. We then flew to Hyderabad and then to Visag. We met with Bhaskar’s brother and a few others on Thursday night and stayed at a hotel.

On Friday we met with pastor Sundarroa and some of the young people from his church and drove for 4 hours to a reservoir which feeds Visag and took a boat and visited two villages and had 2 open air preaching services there. we got back to Visag for an evening meeting at 7.30 and particularly to pray for a man who has had a stroke and was paralysed recently, but amazingly he has come to know the Lord. After the meeting we drove to Narsipatanan arriving at 0100 for a 3 day Pastor’s and Evangelists conference. 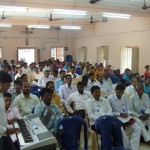 On Sunday we met the Barakah church and all the men in our party preached in the morning and evening services. The conference started on Monday morning with breakfast followed by two sessions of preaching and teaching, and lunch at 1330, then two more session of teaching till 1730 followed by dinner. At 2000 all the church joined together for prayer and ministry of the word. The church in India keeps the tradition of the Lent, so some members of the team had to go to other churches for ministry. This was the format of the Conference every day. We had about 100 pastors and they were very receptive and excited to be there. Most of them were from the surrounding area but we had those who had travelled for few hours, some for 10 hours to be with us! Many of them were from a Hindu background, as well as some from a christian background. There were many young men among them. The preaching was focused on the gospel, God’s calling and really the basic principles of faith. There was a time for question and answers every afternoon which many took part in. We were asked repeatedly to come back next year and many commented that they have been to other conferences but this one was totally different because it was Christ centred rather man centred. One of the highlights of the conference took place after it was over.

On Wednesday night one of the pastors from a Lutheran church, whom God had spoken to, came with his wife asking all the team members to pray for him to receive a double portion of the spirit. It seemed it was a humbling experience for him.

On Friday we left Narsipatnam for Samalkot to be with Suwartha Raju. We visited different churches in the area.

On Sunday night there was an ordination service for Suwartha’s son, Joy, who has been pastoring a church for over a year. The church had difficulties and was not in a good shape when he started, but now it is thriving simply because they have been serious about prayer. The church comes together at 0400 am to pray and God has been answering and moving them forward. Monday morning we left for Delhi. We visited Agra and the famous Taj Mahal on Tuesday and met up with a brother called Emmanuel who has been working for the past 10 years in the city.He started alone and now there are 3 churches that he is leading. He continues in outreach to surrounding villages. We left Dehli on Wednesday morning and arrived in Heathrow at around 1100.
%%anc%%